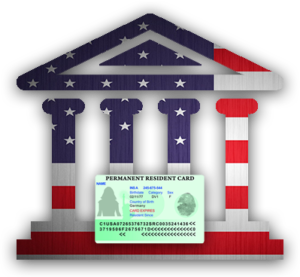 Many U.S. governmental agencies are involved directly or indirectly in matters related to immigration.

USCIS or United Citizenship and Immigration Services is responsible for the overall handling of immigration, citizenship through naturalization and adjudication of visa &green card interviews/naturalization tests/removal proceedings/ appeals etc. They are also responsible for establishment of immigration service policies and priorities adopted by the U.S. congress. It is this agency that potential and active immigrants and their lawyers have to deal with the most.

U.S. Department of Labor (US DOL) is another prime agency with which most immigrants have to deal with, at least indirectly. Employers intending to get foreign citizens as employees for their company has to get Labor certification from DOL that the given job profile is facing scarcity of employees among U.S. citizens. DOL is also responsible for certifying Labor Condition applications which need to be filed by employers on behalf of some visa category employees like H1B, H1B1, and E3 (ETA form 9035).

U.S. Department of State (DOS) (in coordination with Department of Homeland Security) has the responsibility of issuing visas. It is the agency which announces the availability of immigrant visa numbers every calendar month through their monthly visa bulletin. USCIS has to report number and details of applicants for adjustment of status to the DOS and similarly Consular officers from U.S. Embassies and consulates across the world have to report the number and details of qualified applicants for the numerically limited immigrant and non-immigrant visas. Apart from these the DOS is also responsible for the Diversity Visa Lottery program.

Federal District Courts and Appeal Courts are places where cases and appeals are filed against government agencies like USCIS, ICE etc. by immigrants who feel they have not been given justice by the action of these agencies or when undue delay is taking place in their case from the side of these agencies.

State Workforce Agency (SWA) is responsible for placing job orders on America’s Job Bank (agency in charge of advertising job positions officially in the U.S. which is required to show that there is shortage of workers on a particular job even after advertising) which is required prior to filling various work based immigration matters. Both these are state agencies.

U.S. Customs and Border Protection (US CBP) is in control of U.S. ports of entry and whole line of border with other countries. Thus they verify and register the entry of immigrants to the U.S. and also prevent illegal entry through the vast extend of the U.S. border with other countries. They also have power of adjudication in some special immigration petitions and matters.

U.S. Immigration and Customs Enforcement (ICE) agency has the responsibility of enforcement of immigration and customs laws and thus protecting country from unauthorized presence of foreigners and foreign goods in the U.S. They are the people who hunt down illegal immigrants who evade immigration laws and present them before courts and finally effect removal procedure.

Gavlin & Associates, P.C., NY has vast and diverse experience of work with these agencies and we know all nuances of their operation. Thus we can effectively represent you before these agencies.