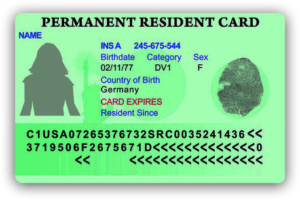 Green card is the popular name of an identification card which attests the lawful permanent resident status of a foreign citizen in the United States. It was earlier known as Alien Registration Receipt Card (Form I-151 of INS). The term green card has become so popular that the U.S. Permanent Resident Card issuing agency USCIS itself mentions it as “Green Card” on many occasions in its website. The reason why it was called green card was because the ID card was predominantly green in color from 1946 to 1964 and later from 2010 to the present date. Green card proves the lawful permanent resident (LPR) status of its holder and gives him the right to reside and get any sort of employment in the U.S.

Methods of obtaining a green card are:

Whatever be the category of application for green card, the process is always problematic and complex. So it is advisable that you get the guidance and assistance of expert immigration lawyers like us at Gavlin & Associates, P.C. New York.