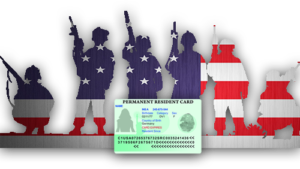 Lawful permanent residents are eligible for enrolling the U.S. members as enlisted members/soldiers. But they are not permitted to become commissioned or warrant officers. Such non-citizen members of U.S. armed forces may be eligible for citizenship through naturalization. The citizenship through naturalization process for members of U.S. armed forces and their immediate kin are undertaken with utmost care and swiftness by the USCIS in comparison to civilian applicants. These include expedited processing even when applied outside the U.S. under the special provisions of the Immigration and Nationality Act (sections 328 or 329 for naturalization and citizenship for military members and 329A for posthumous naturalization for those who died in action and to benefit their immediate kin).

Firstly the non-citizen member need to get the Form N-426, Request for Certification of Military or Naval service duly attested by the designated military official of your command. Then he/she needs to file the standard Form N-400 Application for Naturalization. Spouse and children (under 18 years age and in the legal custody of the military member) of a U.S. citizen or a non-citizen (along with the primary beneficiary) member of U.S. armed forces may be eligible for citizenship or lawful permanent residence under special provisions of INA.

Spouse and children (under 18 years age and in the legal custody of the military member until the time of his/her death) of a citizen member or a non-citizen member who died in action while in service (he/she has to be naturalized posthumously) can also apply for citizenship or lawful permanent residence either in the U.S. or overseas and expect expedited immigration services from the USCIS. But this immigration benefit will apply only if the military member died in a combat or due to an injury related to a combat. The immediate relatives of the deceased military member should apply for the immigration process at least within 2 years of his/her death.

The opportunity to naturalize overseas accorded only to military members and their families and not to other green card holders.

Gavlin & Associates, P.C., NY has vast experience in assisting members of U.S. armed forces and their families in bringing out expedited citizenship procedures and alleviating much trouble in their life.